R.O.W > Blog & News > Lifestyle > The World’s Most Expensive Bottle of Vodka Was Stolen From a Danish Bar 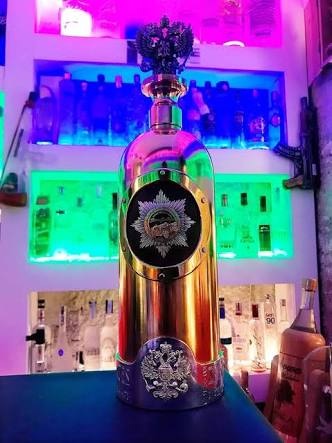 The world’s most expensive bottle of vodka recently disappeared from a bar in Copenhagen.

The bar in question, Cafe 33, has over 1,200 different vodka bottles. The missing bottle was a bottle of Russo-Baltique that was on loan to the bar by a Russian businessman (and was uninsured). It’s estimated to be worth $1.3 million, Bloomberg reports.

While the actual vodka is likely delicious, a lot of that value comes in the form of the bottle the vodka is stored in. The bottle is covered with roughly 6.6 pounds of gold, as wells 6.6 pounds of silver. The cap is in encrusted with diamonds in the shape of the Russian Imperial Eagle. On its front is a photo of a vintage car, and the actual bottle is made of bullet-proof glass, in case you get involved in some James Bond-level martini drinking.

That car design is because Russo-Baltique is actually a Russian car manufacturer. The company unveiled its bottle of premium vodka in July 2015. If its design sounds familiar, it might be because the bottle has made a few TV appearances most notably in season 3 of House of Cards when a bottle was gifted by Russian President Victor Petrov to President Frank Underwood at a state dinner.