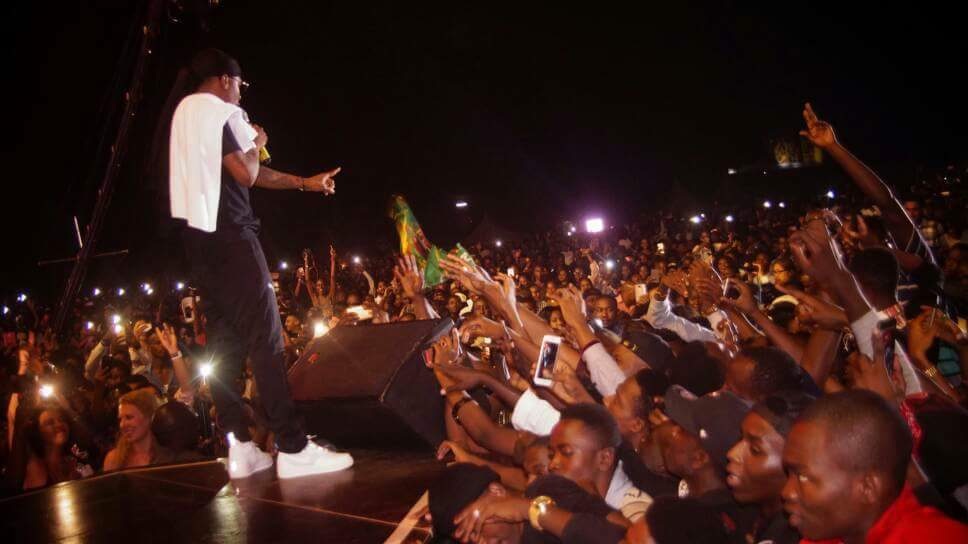 Wizkid set Kampala ablaze with
last nights show at Lugogo Cricket oval where the singer came onto the stage to perform at around 11:30pm, clad in black sweatpants, with a matching jacket and white sneakers with a white towel in hand and telling from his comments and facial expressions, Wizkid was clearly overwhelmed by the love Ugandans showed him.

“I cannot believe what I am seeing here, you people are going to make me buy a house in Uganda. I appreciate the love and support you have shown me, I am truly humbled,” said the overjoyed Wizkid. He managed to send the crowd to sheer madness when he sang songs like, Sound It, Ojuelegba, show you the money, final, Daddy yo, Slow down, revelers were thrown into frenzy, pushing and singing along with .

The Nigerian star also was showed love and was showed that he is a hearts winner especially when one lady pushed through and was pulled up to the stage as she hugged the star sobbing and taking deep breaths and consequently begging him to hold her for at least a second because she was overcome by emotions. He performed nonstop till he concluded the show at midnight with his song Ojuelegba which talks about his life ad where he grew up from that sent the crowd to sobbing in mixed feelings.

And afterwards, it was concluded that of all Nigerian artistes, Wizkid topples them in the way of being loved as no other artiste from the same country has ever hit the concert to full capacity than Wizkid the hearts winner. Some Ugandans were overheard suggesting that the organizers should keep him around and stage another show today the 8th of December so that they get more of him.