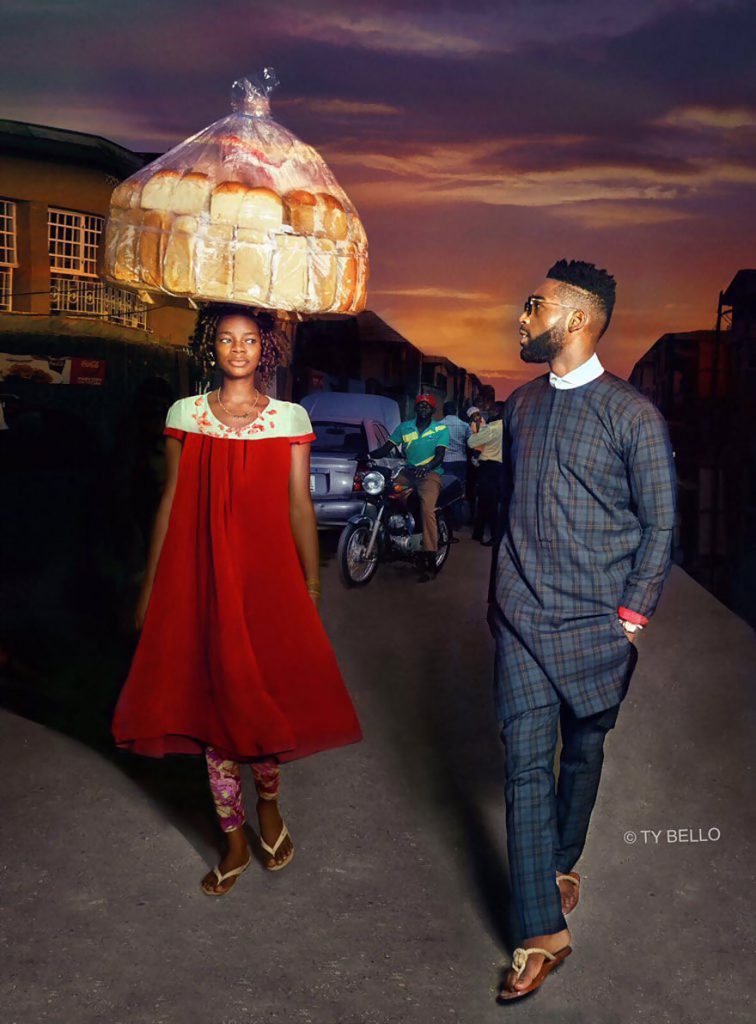 famous photographer comes across your picture. They are utterly impressed by your image. Before you know it you’re catapulted to fame and fortune.

But for Olajumoke Orisaguna this dream became a reality, when she accidentally photo-bombed a shoot for a famous musician.

British rapper Tinie Tempah and photographer and singer Ty Bello were doing a photoshoot in Nigeria.

They were astounded by bread seller Olajumoke and Bello took a photo and posted it to Instagram.

The photo was perfect, and both Bello and Tempah were being flooded with messages on who the mystery girl was.

“Who is she? Every one has been asking if this lady is a model… It was just perfect coincidence,” wrote Bello on Instagram.

Thanks to the help of social media, 28-year-old Olajumoke, a mother of two, was eventually found.
Bello’s helped Olajumoke scored a modeling contract, and the enchanting beauty was just featured on the cover of This Day Style. Ty Bello also plans to create a documentary about her life.

Olajumoke, or Jumoke as she is called by her friends, was born in Ire, Osun State. She trained as a hairdresser and later met where she craftsman Sunday Orisaguna. They later married in 2010 and had two children. She had traveled to Lagos with one of her children to make more money selling bread. Then destiny happened and her life changed forever. Olajumoke was offered a modelling contract despite not speaking English. She is fluent in Yoruba.

Following her success, her husband and children moved to Lagos. According to CNN, a bank in Nigeria has offered to pay for her children to attend school.
She was also awarded a scholarship by Sujimoto Group and Poise Nigeria.

She will be learning Etiquette, Soft Skills, Social Graces and Communication at Poise Nigeria (The first and most prestigious finishing school in Nigeria)

Olajumoke has also announced  she is about to start her vlog and reality show.

“My Vlog & Reality show will be launched on June 25th on CruisenChillz boat cruise event. I need all your prayers & support. God bless you all.” she wrote on Instagram.[source: scubby.com]