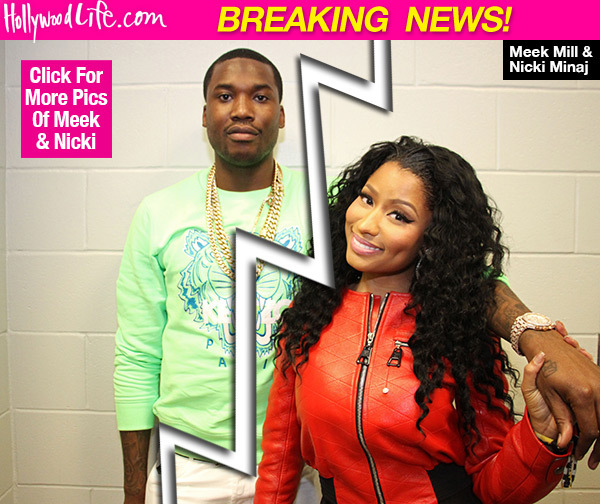 Nicki Minaj and Meek Mill have officially called it quits! After a two year on and off relationship, the couple are no more — and the reason for their split may surprise you. Read on to find out what the final straw was — and who broke it off.

“Nicki [Minaj] and Meek [Mill] are not on the same page,” an insider told MediaTakeOut.com. “Meek still wants to go to the hood, hang out with his boys and ride bikes. Nicki’s into refined things, like museums and fashion shows. They both have similar pasts, so they hit it off. But Nicki is no longer in a ‘hood mentality’ and Meek is. One day he’ll grow up and maybe they’ll get back together.” And, sadly for Meek, 29, apparently the decision to split was not a mutual one. “Nicki wanted to leave, Meek wants her back,” the source said. But will the 33-year-old “Anaconda” singer consider taking him back? Maybe not after the stunt he pulled last month.

Meek was spotted at ACES Strip Club in Queens, New York, without his now ex on July 27. That night he dropped a crazy $20,000 at the club and was caught on camera having a great time with his buds. And because Nicki wasn’t there that night, but had previously been included in his strip club outings, we wondered what was going down between the pair. Now we think that was definitely a sign the couple was headed to splitsville.

We hope this breakup will be for the best, even if it wasn’t what both of them wanted. Maybe Nicki made the right decision, especially if the two have become so different. And who knows, maybe the time apart will be what they need to make their way back to each other one day. Maybe.

Nicki Minaj and Meek Mill recently took their relationship to another level when they moved in together, but could the “All Eyes On You” rapper be thinking about taking it another notch?

Mill posted a photo of Minaj with a pregnant belly. He captioned it: “Haters will say it’s photoshopped.” But it is an altered photo of the “Anaconda” rapper. The woman in the photo is actually fitness guru Tammy Hembrow.

Rumors about the “Super Bass” rapper being pregnant start swirling now and then, so perhaps Mill was only trying to set the record straight but thought to inject a little humor into it.

Minaj first sparked pregnancy rumors during a concert in Pennsylvania in August 2015. The “Feeling Myself” rapper introduced Mill as his “baby father,” according to TMZ.