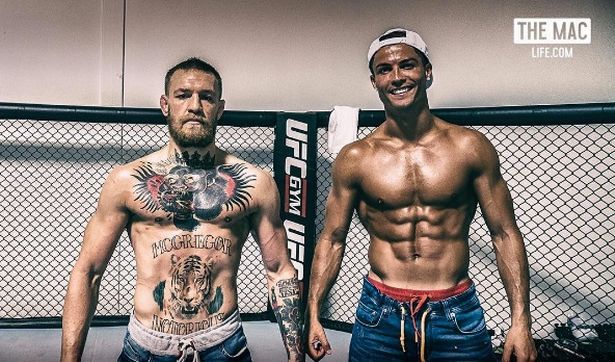 The Notorious predicted he would usurp the Real Madrid superstar during a meeting two years ago and now  Conor McGregor will rise above Cristiano Ronaldo in the latest Forbes rich list for athletes after banking more than £77m in his knockout defeat against Floyd Mayweather .

The Notorious was stopped in the 10th round in Las Vegas but was already a winner before the first bell thanks to the record-breaking buzz that generated up to £500m.

Ronaldo topped the list this year with earning of £71m, but the Real Madrid star will drop down after McGregor career-high pay day.

“You [Ronaldo] were number one on the Forbes list, I was like number 35 or something,” McGregor said in a meeting last year. “I’ll get up. Maybe next year I’ll get you.”

“I don’t think so,” said the Portuguese star.

Despite leapfrogging the No.1 earning athlete, McGregor will not assume the throne, with Mayweather’s £233m purse putting him back atop of sport’s money-makers.

The list is calculated by adding together salaries, bonuses and endorsements, which include sponsorships and appearance fees.

Any tax or agent fees are no counted, while those not active in the last 12 months are removed, hence Mayweather’s absence this year.

If Mayweather keeps true to his word, then McGregor could top the rankings in a year’s time by maintaining his earning power both inside the boxing ring and back with the UFC.