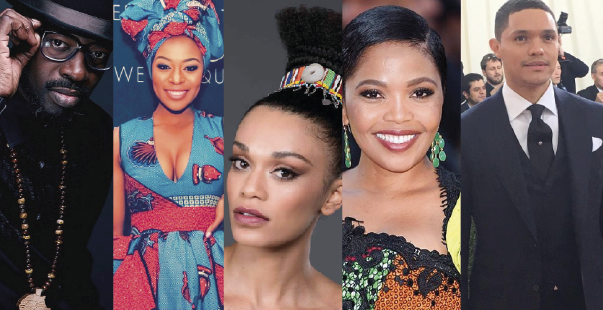 South African celebrities are getting out of their comfort zone and making a name for themselves in other countries.

Not everyone can say they have been on the cover of Time magazine, or Forbes list of richest celebrities in the world or even claim to have taken a selfie with P.Diddy, but some of these Mzansi celebrities can tick those off their bucket list. Here are some of Mzansi stars making it big outside of the African continent:

Since her debut on-screen as Miriam in Oscar-winning feature film Tsotsi, Terry has gone from strength to strength, even featuring in the legendary soapie, The Bold and Beautiful.

After scoring one of the biggest jobs in the world on the Daily Show on Comedy Central, Trevor’s career is soaring. This year, he was nominated in two categories at the National Association for the Advancement of Colored People (NAACP) Image awards. Trevor Noah is currently on the cover of Time magazine alongside Seth Meyers and John Oliver.

From humble beginnings to the world’s stage, Pearl Thusi is slowly making her mark. Her recentdebut on American TV series Quantico season 2 made South Africa proud.

Many big brands would like to be associated with a brand like Nomzamo Mbatha, and being the face of PUMA SA and Neutrogena SA does not only come from being a pretty face. Nomzamo has earned her stripes in the acting world and her career is growing at a rapid speed.

Producer and DJ Black Coffee’s most likely to be able to point out Ouagadougou (the capital of Burkina Faso) on a map, that’s how well-traveled he is. He has made people from all over the world dance to his music.