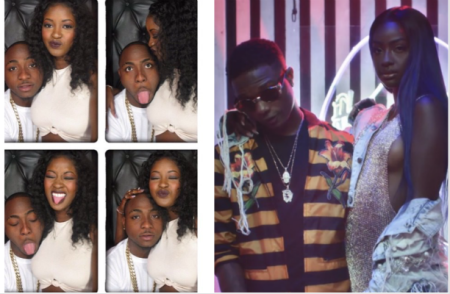 It is certainly no news that Davido and Wizkid are arch-rivals in the Nigerian music scene with the duo having several bouts of disagreements in the past and fans of the two ‘music lords’ constantly in the bid to determine who is better between the two singers.

The latest beef between the singers seems to be a battle of exes as they are now making frantic efforts to get back at each other with their exes.

Apparently, Davido has been looking for a way to get back at Wizkid for using his ex, Sira Kante in his come closer video. The opportunity however came for the ‘Fall‘ crooner as he got the chance to get even with Wizkid as he believes that the singer used his ex in ‘Come Closer’ in a deliberate attempt to get to him.

Justine Skye posted a video of herself singing  maybe to take a swipe at her ex, and  Davido who took it as an opportunity to get back at him also, reposted the video, tagged Justine alongside four love emojis.

The battle of exes is certainly a good one to watch… we hope Wizkid and Davido come to terms with each other soon enough. Let’s keep our fingers crossed