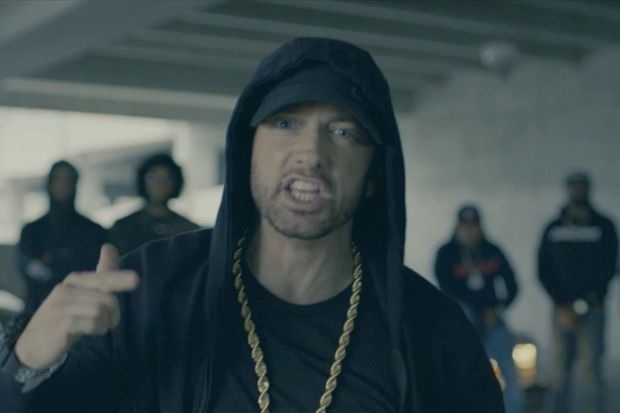 Since the inaugural BET Hip Hop Awards in 2006, the ceremony’s claim to fame has been the prerecorded BET freestyle cyphers. (Nobody remembers who wins any of the actual awards.) These interstitial video clips usually involve rap crews (like SlaughtaHouse or G.O.O.D. Music) or mixed rosters of big-name acts and lesser-known MCs. This year’s lineup included cyphers led by Fat Joe, Tee Grizzley, CyHi The Prynce, and Denzel Curry, but there’s only one freestyle that will be remembered. A surprise late addition to the lineup, announced hours before the ceremony, was none other than Eminem—and he delivered:

In the four-and-a-half-minute clip that was retweeted a whopping 64,000 times in two hours, the Detroit MC uses his camera time to directly address President Donald Trump, as if standing before the president in a rap battle. “This is the calm before the storm,” he announces before launching into his searing, a cappella polemic. What ensues is an unsparing takedown of many of Trump’s misdeeds. Eminem speaks to Trump’s diplomatic failings with North Korea: “We better give Obama props ’cause what we got in office now is a kamikaze that’ll probably cause a nuclear holocaust.” The rapper addresses Trump’s unsavory political alliances and his mishandling of the events in Charlottesville: “From his endorsement of Bannon, support for the Klansmen, tiki torches in hand / For the soldier that’s black and comes home from Iraq and is still told to go back to Africa.”

Perhaps most notably (and timely), Em talks about Trump’s recent disparaging of those professional athletes choosing to kneel during the national anthem: “Now, if you’re a black athlete, you’re a spoiled little brat for / Trying to use your platform or your stature to try to give those a voice who don’t have one / … He gets an enormous reaction when he attacks the NFL, so we focus on that / Instead of talking Puerto Rico or gun reform for Nevada / All these horrible tragedies and he’s bored and would rather cause a Twitterstorm with the Packers.” Nearly out of breath, he pauses to say, “This is for Colin / Ball up a fist.”

Eminem, of course, isn’t the first celebrity to speak openly and passionately against the president. Still, the 44-year-old rapper, known for his alternatingly frivolous and vitriolic tongue, is one of the most popular musicians of the last 20 years and wields a massive internet following (his official Facebook page has more than 90 million likes and his personal Twitter account has 21.3 million followers). The video—since titled “The Storm (Freestyle)”—tweeted from his account has been widely shared and is already being heralded by fans, political pundits, and even Colin Kaepernick himself.

While the performance was not without its flaws (such as: “You don’t have the fucking nuts like an empty asylum”), it was a strong condemnation of President Trump from a white artist with huge reach. Eminem even called out the segment of his fanbase who may support Trump directly: “If you can’t decide who you like more and you’re split and you can decide who you should stand beside, I’ll do it for you with this: Fuck you!” he proclaims, shoving his middle finger into the camera lens. It was unsparing and angry and exhausted, just like many of us.