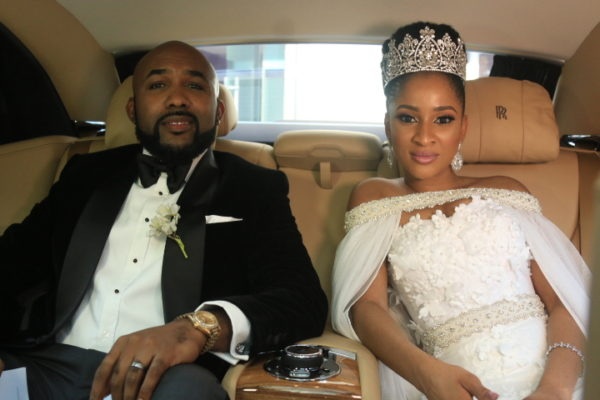 A documentary on the celebrity wedding between R & B Singer Banky W and Actress Adesua Etomi hit TV screens on Africa Magic channel on Jan. 6.

The official trailer released by Africa Magic of the documentary titled “The Wellingtons”, showed the couple sharing details on why they chose to share their special day with the world.

Africa Magic is a collection of Pay TV entertainment channels that focus on African content, the marriage of the celebs caused a lot of frenzy on the internet with hashtag handle #BAAD2017.

Also, at the traditional wedding, TV Personality, Ebuka Obi-Unchedu stole the show with his ‘one of a kind’ designed Agbada outfit. .

Before their traditional marriage and white wedding in Nov 2017, the Nollywood sweet hearts starred in the blockbuster Nollywood romantic movie, ‘The Wedding Party 1’. They played the principal characters of a couple, Dunni (Adesua) and Dozie (Banky W) in the award-winning romantic comedy.

Adesua reportedly became the third most searched individual on Google Nigeria during the year. She starred in her first feature film, “Knocking On Heaven’s Door” in 2014. She also won the Best Actress in a Drama award at the 2016 Africa Magic Viewers Choice Awards for her role in the 2015 romantic drama ‘Falling’.